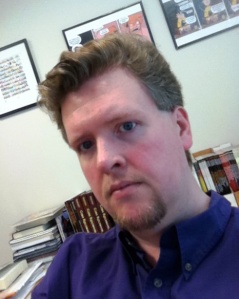 Jason Bulmahn has coordinated the world’s largest organized play D&D campaign for the RPGA of Living Greyhawk, later joined Paizo Publishing as the managing editor of Dragon in 2004.

He, in 2007, took over as lead designer of Paizo Publishing. Within two months of Wizards of the Coast’s August 2007 announcement of D&D fourth edition, he began working on a new edition of the d20 system that updated and polished the rules system.

When Paizo decided not to wait any longer to see how Wizards of the Coast would allow third-party publishers to support their new game, Paizo turned he’s side project into a complete RPG to give them their own set of core rules for the d20 game system; Paizo thus announced the Pathfinder Roleplaying Game on 2008. He is from then the lead designer of the Pathfinder Roleplaying Game.

He has also written or contributed to Pathfinder books such as Carnival of Tears, as well as Dragon and Dungeon articles and books such as Secrets of Xen’drik, Expedition to the Ruins of Greyhawk, Dungeonscape, and Elder Evils.

His work has earned one Origins Award and numerous ENnie Awards, including Best Game and Product of the Year.

He is the publisher of Minotaur Games, a company dedicated to creating products compatible with the Pathfinder Roleplaying Game as well as card and board games.

Jason is one of the big authors in roleplaying games.

Juegos y Dados – Welcome Jason, thank you so much for your collaboration. It is an enormous pleasure that you are here with us.

Jason – Thanks for having me, I am always happy to speak with roleplayers from all over the world.

Juegos y Dados – How did you begin in the world of role-playing games and what was the first roleplaying game that you played?

Jason – I started out playing Dungeons and Dragons in a friend’s basement back in 1985. We started with the classic 1983 Frank Mentzer Red Box version. Growing up in Milwaukee, I found myself attending my first Gencon only a few years later. By 1999, I was volunteering for the RPGA and writing adventures, which eventually landed me the job at Paizo.

Juegos y Dados – What was the first roleplaying game that you written or contributed?

Jason – The first game I ever wrote for professionally was Dungeons and Dragons. I had a published adventure in Dungeon #114 called the Mad God’s Key. Soon after, I got work writing for Wizards of the Coast, contributing to Secrets of Xen’drik, Dungeonscape, Elder Evils, and Expedition to the Ruins of Greyhawk. Pathfinder was the first game I ever designed.

Juegos y Dados – How did you get involved in the campaign for the RPGA of Living Greyhawk?

Jason – I had been playing games in the RPGA for many years, mostly classic events and Living City games. I was going to every convention and won a number of awards for “Best Roleplayer”. I used the experience when the call went out to help manage the new Living Greyhawk campaign and got the job, managing Wisconsin. Two years later, I was promoted to running the campaign as a member of the Circle.

Juegos y Dados – How did you start to work in Paizo?

Jason – I actually got my job at Paizo by applying for a job at Wizards of the Coast. I nearly got the job there, and flew out to Seattle for an interview. I knew Erik Mona from my days working on Living Greyhawk (when he ran the campaign), so I visited the offices of Paizo. When I did not get the job with Wizards, Paizo had an opening and Erik called to offer me the position working on Dragon Magazine. I started just about a month later.

Juegos y Dados – How did you get involved in Pathfinder?

Jason – Well, Pathfinder actually started out as a bunch of house rules and experiments for my home game. With 4th edition D&D about to be released, I dreamed of making a PDF of revisions to 3.5 and selling it to fans that did not want to convert. When Paizo decided to skip 4th edition, I suggested that we publish my rules as their own game and the Pathfinder RPG was born.

Juegos y Dados – Pathfinder is an amazing RPG. Do you think that D20 is a good system to introduce the new RPG gamers or is better for players of old school?

Jason – The d20 system can be a bit intimidating for new players. There are a lot of rules, but there are ways to make it a bit more friendly, like removing some of the more advanced rules. It’s one of the things we did with the Beginner Box.

Juegos y Dados – I think that the Beginner Box of Pathfinder is one of the best beginner box in the history of the role-playing games. It includes books, tiles and tokens and it is perfect to start new players in the game. Was it designed with this idea?

Jason – That was exactly the idea. We wanted it to be a complete package, giving new players everything they needed to play and presenting the game is a simple fashion. We really wanted you to get right to the adventure, instead of spending hours and hours reading rules. The Beginner Box turned out just about perfect for that. 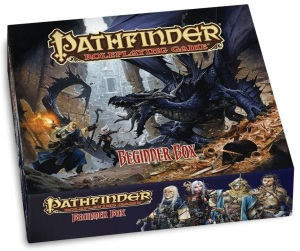 Juegos y Dados – I love the Pathfinder Adventure Path. I think that are like mini campaign setting that are very useful for the masters, and not only for the adventure, is like a guide in a region of Golarion. Was it thought with this idea?

Jason – I actually do not have a lot of involvement with our adventure paths. James Jacobs is the master of that line and would be a better guide in answering that question.

Juegos y Dados – Pathfinder is called for some people like OGL 3.75 version or 3.5 improved version. What do you think about this statement?

Jason – I think it is mostly true. Pathfinder was born out of 3.5, but in the past 8 years we have added a lot to the game to make it its own unique game. If you look at all of the new classes and archetypes we introduced, it is a lot more than we ever took from 3.5

Juegos y Dados – You are lead designer, author or co-author in one of the most famous RPG of our age. What do you think about so people with a copy in their homes?

Jason – It is really amazing. I never thought that the game I created would be owned and enjoyed by so many people around the world. It is a great feeling, knowing that my creation gives people so many hours of enjoyment. 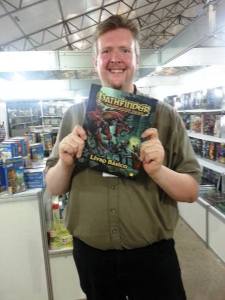 Juegos y Dados – I suppose that you met some of famous designers. Could you explain any funny story?

Jason – The first time I met Frank Mentzer was at Gencon. He approached me and told me how much he liked my game. I thanked him, not knowing who I was talking to. When I finally looked at his badge, I could not stop laughing. The man who wrote the game that got me into gaming had just told me that he really liked my game!

Juegos y Dados – Have you ever been Master? I would like knowing funny moments in the role-playing stories.

Jason – I run Pathfinder all the time, but I also run horror games and mystery games. Just recently at Paizocon, I ran a game using the “End of the World” system from Fantasy Flight. Everyone who showed up had to make themselves into characters. Meanwhile, I was getting more and more sick as I explained the rules. Once they had made their characters, I excused myself to go to the restroom and did not come back for 20 minutes. When I returned, I told them that the game had just begun and I did not return from the restroom. They eventually went out to find me, only to learn that I had become a zombie and the entire convention was filled with more zombies. The best part, they killed me by bashing my head in with my own Core Rulebook!

Juegos y Dados – How often do you play games? Which ones?

Jason – I play Pathfinder once per week, Call of Cthulhu on occasion, Dread every once and a while, and board games whenever I can. Not to mention video games, card games, and a few party games. 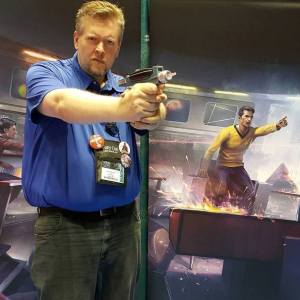 Juegos y Dados – What do you think the RPG industry nowadays?

Jason – I think we are seeing some really exciting things in the industry today. Lots of new games being made every month. With the rise of PDF publishing and the explosion of games being made with Kickstarter, anything is possible. There are so many good games, it is hard finding time to play them all.

Juegos y Dados – Do you think designing or writing any new Pathfinder books in the future? Could give us any details?

Jason – We are just about to release The Villain Codex, a giant Pathfinder book filled with lots of new villain statistics, grouped up by organization. The book is sure to be invaluable at every game table.

Juegos y Dados – Do you think writing any fantastic novels?

Jason – Although I have tried writing fiction on occasion, it is not something I am currently planning on doing.

Juegos y Dados – Is there anything else you would like to tell fans?

Jason – I am also really excited for an upcoming campaign I am launching through Minotaur Games. It is a series of adventures that are tied together, but it also comes with 6 premade characters, each of which has their own rich story, personality, and motivations.  Their stories are also tied closely into the adventures, making this is unique campaign experience. I am calling it a “Dramatic Campaign” and you can learn all about it in the coming weeks and months on the Minotaur Games website.

Juegos y Dados – Thank you so much for your time. We are very happy for your collaboration in this interview with Juegos y Dados.

Jason – Thanks for giving me this opportunity. Good Gaming!